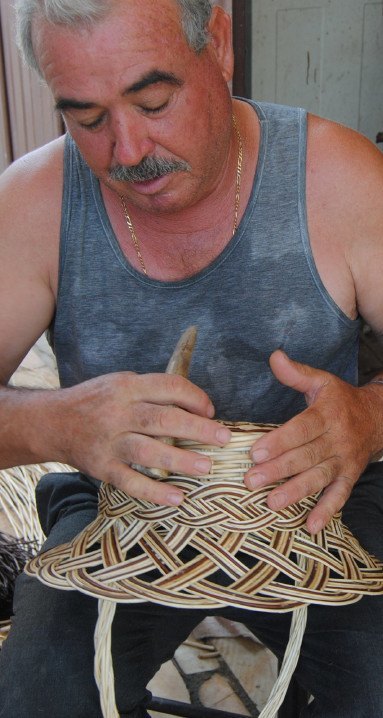 José Amendoeira was born in 1952 in Santa Clara a Velha, in the municipality of Odemira, but has lived in Pereiras de Almancil, in Loulé, since he was a young man.  He makes baskets out of wicker, willow, olive tree and also from cane. His father preceded him in this craft. He learnt from him the art he has been developing since the age of eight. He came to the Algarve while still very young to work in farming. He did everything, and in between he would return to basket weaving. “People would do this kind of work (basket weaving) at the end of the day, or when there was less work to be done in the fields. They would make more and more baskets and when there was a fair, they would go and sell them.” He started making baskets full-time when he reached 30. In January and March he harvests willow and wicker along riversides in São Marcos de Serra and in Monchique. He likes his work and says he wouldn’t change it for the world. But he doesn’t hold much hope that young people will develop the same passion for it that he inherited from his father.