News / Articles / From blankets to tableware: geometry, colour and ‘díaita’

From blankets to tableware: geometry, colour and ‘díaita’

Written by projTasa on 25 September, 2014. Posted in Articles 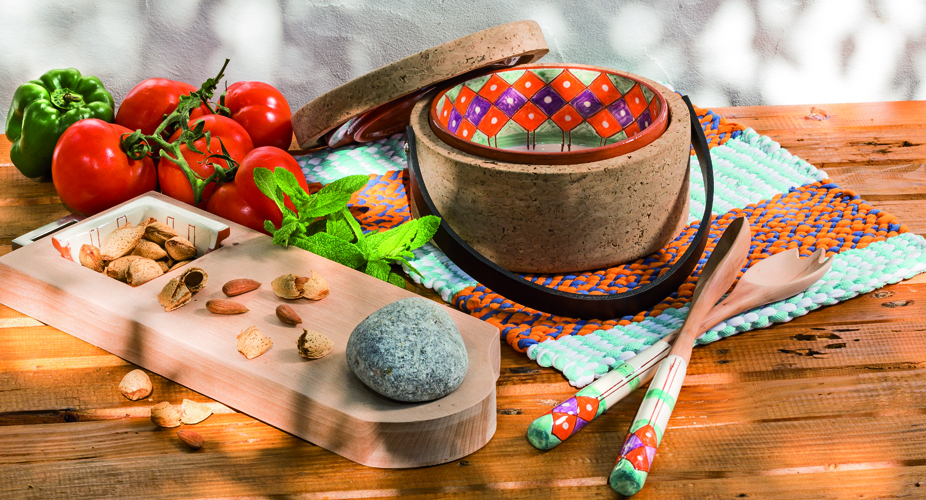 This collection of TASA products brings together two fundamental subjects: on the one hand, the nature of the items, a kitchen range, which connects them to food; on the other, the way they look, inspired by the decorative patterns of the blankets from the Alentejo and, in particular, the so-called ‘montanhac blankets’. Both subjects can be seen as links in an old cultural tradition, common to the regions that take part in this new product creation phase. The project now not only focuses on the Algarve, but also on the Alentejo and on Andalusia, regions, which, despite their own specific features, varieties and special characteristics, share, possibly, the same essence of civilisation. TASA thus opens itself up to new challenges and broadens its inspirational horizons!

The Mediterranean diet is one of the main cultural characteristics of these regions, justifying the different approaches made to it. Indeed, the ‘Mediterranean diet’ concept is not restricted to food per se, although, this has been, in its own right, an aspect of great importance. Firstly, the ‘Mediterranean’ characteristic itself does not only refer to the area bordering the sea, which gives it its name; then, because the term ‘diet’ reflects much more than just food. Derived from the Greek word “díaita”, it primarily expresses a way of life, or cultural model, which includes food, production systems, objects, tools and techniques used by the different communities over the millennia, in which festivities, rituals and other similar manifestations are included. It is, therefore, within this field that the creative process behind this collection of TASA products is developed: relating the pieces, which are kitchen items, with the idea of food, which is their prime function, but also with diet, in its broader sense. An example of this is the ‘Tarrina’, a piece made from clay and cork, which works both as a recipient for serving food at the table, and as one to transport food, like the lunchboxes farm workers used to take to the fields with them; or the original olive oil stand, specially designed – alongside the oil – to serve as a vase for freshly picked herbs, the perfect condiment for any number of dishes of Mediterranean cuisine.

Nevertheless, another important aspect in the realisation of these pieces is their decoration. In actual fact, this isn’t about another subject. The careful selection of materials to create the objects, or to decorate them, is part of a thought process, which, traditionally, results from the perception that the artisans have of the territory in which they live, or with which they establish relations. An ability to interpret that is connected to the physical characteristics of the place, but also to those of a more cultural nature, which define ways of life, tastes and ideas of the people. In this respect, the decoration of a piece is almost never random or inconsistent, even when it appears to come from automated gestures. It is symbolic and says a great deal about the place in which it is produced, contributing towards transforming the objects into tangible testimonies of peoples’ experiences. Decoration and the processes involved therein offer us – us, the viewing public and user – varied information about the selected materials, about the techniques used in their manipulation, about the characteristics of the territory, about the preferences and knowhow of the population, about messages they want to transmit and, above all else, about the cultural background that shapes them.

The name ‘montanhac’, given to the collection, calls to mind the decorative motifs of the well-known blankets from the Alentejo, from which it draws its inspiration. This aesthetic option can be seen in the context of cultural interest associated to such woven pieces, but, as in the past, can relate to a certain attraction to the geometric designs they feature. These compile a catalogue of rich decorative patterns, from the most simple to the most complex, which seem to hark back to our Maghreb roots. The attractive result from this kind of design, repeated for centuries in a succession of similar gestures – and which, can be found in many objects – is now transposed and recreated in a different craft production situation, namely the TASA Project. However, when it comes to some of these pieces – clay containers – you can even talk about a kind of ‘back to beginnings’, in that many of the patterns in the Alentejo blankets reveal a great affinity with the rich decoration of some Islamic ceramics.

In the objects inspired by Islamic culture, whether earthenware, woven goods or other, two fundamental ingredients are normally seen: geometry and colour. The latter, in addition to the natural symbolism usually inherent to it, is particularly related to the place of production, from where, in the majority of cases, the artisans extract the pigments of the desired colours for the objects created. This circumstance led to the realisation of a work heavily identifiable with its place of origin. In the case of Alentejo blankets, traditionally you see the dark hues of the colours of the earth – between beige, brown and black –, coming from natural pigments. The colours selected to adorn this collection come from a more varied palette of possibilities, resulting from modern technologies. Nevertheless, they still symbolically relate to the territory, reflecting some of its characteristics and meanings. As such, blue pays tribute to the bright hue of the sky and of the sea in the Alentejo and the Algarve; orange calls to mind the orange groves of the Algarve, in addition to the vast fields of poppies, in the Alentejo; and violet, the shades of the fields of heather and lavender present in these landscapes. All three refer to aspects related to the rural environment, which identify them with the territory, while applied to products of a more urban and sophisticated nature.

On the other hand, the ‘montanhac blankets’ are part of a weaving tradition common to the Alentejo and the mountains of the Algarve. With different varieties, made possible by the many combinations of the geometric motifs creating distinctive wefts, ‘montanhac’ blankets hold a position of great prestige within styles of traditional woollen blankets. Prestige to those who own them, as they are not something that everyone can afford, but also prestige to those who make them, in that they represent the very height in weaving arts. Likewise, the work of the craftspeople developing the pieces in this collection is thus of great value: as they possess knowhow and expertise in how to process and combine the materials used – clay, wood, cork, tin or fabric; and as they create objects, which, as they are commonplace, appear highly stylish, with innovative interpretation and design.

To summarise, the same decorative system applied in woven ‘montanhac blankets’ is still being applied in other contexts, in an ongoing updating of senses, trends and possibilities that talk the same language, and which mould perfectly to the spirit of the TASA Project. And all of this remains, to some degree, linked to this ‘díaita” of the space of Mediterranean influence, making their mark as the product(s) of an age-old cultural heritage, while ever renovated and reinvented.