From the hands of a master basket weaver from Furnazinhas 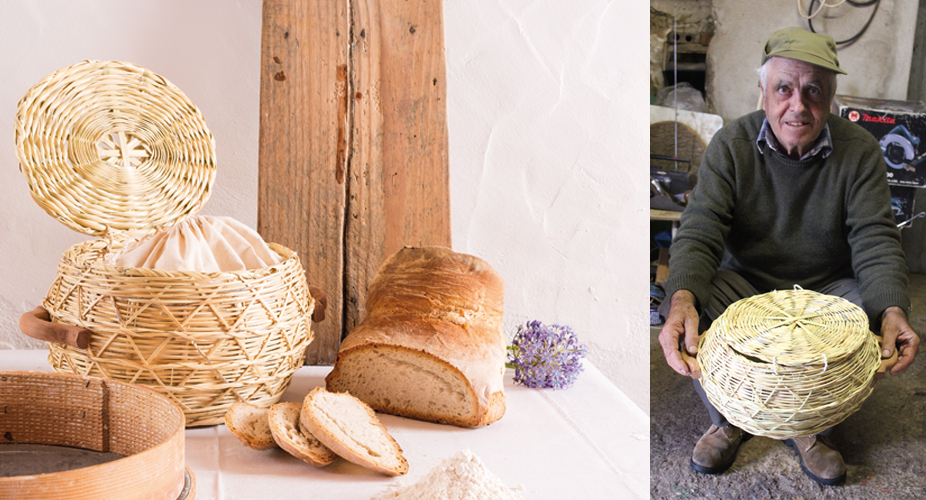 This bread basket, which uses the Algarve art of basket weaving with cane, boasts an innovative oval shape, not usually seen in traditional baskets. It features a lid on the top, to protect and preserve the bread, and two wooden handles on the sides, making it very practical to move about. It features an intertwined geometric pattern, inspired in the ‘platiband’ house façade murals and mosaics of the Algarve. Its interior is lined with cloth, which can be easily removed and washed. Generous in size, it’s perfect for storing the Algarve’s delicious family-sized loaves.

Monte das Furnazinhas is home to basket weavers, who have learned their craft out of the need and resourcefulness of generations of ancestors. Rural chores, the abundance of cane and the fishing industry nearby, brought about the custom in men to use their free time making baskets.

António Gomes was no exception. He began making baskets aged seven, out of reeds, “which is easier to work”. Later on he dared to interweave cane with his friends. He and his friends watched the repeated movements of their elders, and when they took the pigs to the river gorge, they would use the time to split cane, weaving and unravelling until they got the hang of it, “because this isn’t something you can pick up in a day, you learn as you go along”.

When he was older he started to build up his ‘nest egg’ by selling baskets to fishermen for “10 pennies”. “One night, with a friend, I managed to make 24 of them, by the light of an oil lamp.” That’s how he took 300 Escudos with him to Mozambique when he did his national service. When he returned he worked as a cabinetmaker, a mechanic and a machine operator in the countryside.

When plastic invaded everyday life, cane baskets become nothing more than entertainment, or the stubborn act of anyone keen not to lose their love for this art.

In the late 80s, António Gomes taught on a course teaching a group of young women in Castro Marim. It was an unforgettable experience, but the only one he has had in terms of teaching. His involvement in the craft industry now is limited to the “castle markets” in Castro Marim, where sometimes he sells just one basket.

When Joana Cabrita and Ana Rita Aguiar appeared in Furnazinhas, it was revolutionary. Master Gomes regained his enthusiasm for the challenge of doing something different and to once again work with younger people. But he wasn’t alone. Whenever they arrive, the neighbours come into the basket weaver’s workshop to see how far they’ve got and to give their opinion of the results. They use this time to tell stories about former times and to prove, in their emotional tales, the magic of this unique place.

This bread basket has master Gomes’ hands all over it. He weaved and unravelled the cane as many times as was necessary, so that the basket achieved its unusual oval shape, the right size, and the exact reproduction of the design. Using his cabinetmaker skills he built the wooden handles. With the wisdom that comes from living in the countryside, he twisted agave fibre to make the rope that holds the lid.

The expression on the master basket weaver’s face when he looks at his work is one of joy. “I really like these inventions, and knowing that this basket I’m making is going to Oporto,” he explains, with pride and humility. And this is just what spurns us on to continue this project. Our congratulations to Furnazinhas and its extraordinary people.