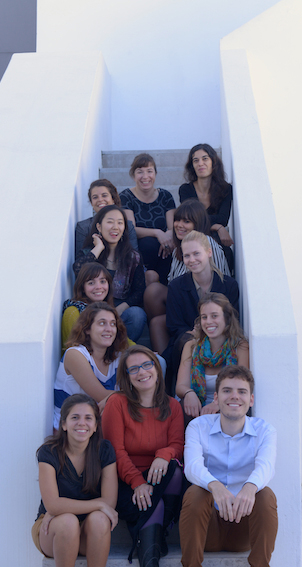 Over an intense week-long creative residence, eight Portuguese and foreign designers joined forces with five craftspeople from the Algarve to create four products that respond to the challenges posed by the market. Tradition and innovation are clear to see. The connection between craftsmanship and design, too. Endogenous materials and age-old techniques. Beauty and functionality.

The synergy created between the generations, the expertise, the disciplines and the cultures resulted in:

Chi^mni – from the Algarve chimney to a bird scarer

Tarra – for your computer, on your bike or over your shoulder

Tia Anica – to accompany you on your walks

The idea was ambitious. The challenge seemed unfeasible. Bringing young Portuguese or foreign product or equipment designers, getting them to work in multinational teams of two people, giving them a brief containing market suggestions, occupying the workshops of craftspeople in the Algarve and developing, with them, product prototypes that would be ready within six days to present to the public…

Would there be any candidates and enough of them? Would they be able to work in a team on a product? Would they understand the essence of the TASA Project and would they be able to pass it onto the solutions they create in such a short space of time? Would the craftspeople embrace the ideas? Would they be open and willing to experiment until finding the ideal solution? Would it be possible to mould, weave, apply, cut, sew…the pieces? Would the results be to peoples’ liking?

All these concerns were answered with a resounding “yes”. It wasn’t just a loud yes, but rather one that, from the outset, filled all those who took part, young designers, craftspeople and the team, with pride.

The methodology used proved to be well prepared and executed, for sure; the candidates were well selected, another factor; but unpredictable variables in terms of interpersonal dynamics (which we can never fully control) were in our favour. There was an exceptional work climate; a strict adherence to the programme (“it wasn’t Portuguese-style”, was said); and, above all else, a good relationship between the teams of designers and the craftspeople. An openness to exchanging knowledge, knowing how to listen to others, to observe the culture of the place, the way in which materials are worked, respecting your elders and the young, wanting to innovate and not giving up until the solution is found…These were the favourable ‘unpredictables’, which marked the work week from October 21 to 26, 2013.

Andreia Rocha and Érico Branco, a Portuguese woman in the Netherlands and a Brazilian man in Sweden, worked together with Dona Cremilde, the palm leaf weaver from Palmeiros (Loulé), to create the walker’s bag. Dona Cremilde is an expert, who says she knows nothing because she left school after year 4. No matter how many times you tell her she’s wrong, she just smiles, thanking you for being so kind. Anyone listening to her is astonished by the immense goodness and truth in her words. The young designers fell in love with her, for her character, her hospitality and for the poise she has for detail. They called the bag ‘Tia Anica’, but in truth it is Dona Cremilde, in the details and in the finishing. ‘Tia Anica’ reflects the deep respect, sharing and understanding that resulted in an effective and affectionate three-way creation.

Yelena Tyo and Joana Regojo, a Kazakhstani and a Portuguese-Spaniard, chose the mission of scaring away unwanted birds from vegetable patches and veranda of garden lovers; in a natural way, of course. In their trips to the region they saw, and fell for, the chimneys of the Algarve. They noted that there were different patterns and finishes, and that each chimney communicated its own identity. They did enough research to understand that birds don’t like certain sounds and movements. They chose cane and Ana Silva, and set off for Messines to invent the ‘Chi^mni’ with her – a mechanism made of cane and glazed clay of varying colours, which repels birds, but which catches the eye. The cane craftswoman didn’t cave in, given the countless attempts to reach a solution, transforming the designers into craftswomen. And the three of them had a great time.

Vanda and Isabel, a Slovakian and a Northerner (Portuguese), focused their efforts on wine. In Portuguese homes and restaurants, wine is a constant, but when you buy wine in boxes, they don’t have the most elegant packaging. Creating a container for wine boxes – that was the challenge! The designers looked into old ways of storing and transporting wine. They incorporated materials traditionally associated with wine: cork and clay. They worked with potter Pedro Piedade (from Loulé), cork craftsman António Luz, from São Brás de Alportel, and with the most ‘Algarvian’ of South Americans, Zuñiga, from Loulé, who was responsible for the leather work. With each of them working to their own style and work methods, the multinational pair adapted to their situation, after plenty of trial and error, finally arrived at ‘Pinga’. In its tall or shorter version, ‘Pinga’ is a container, made of clay and cork, with a leather strap, which serves to hide 3 or 5-litre packs of wine. This elegant ‘barrel’ looks a treat as a highlight on any restaurant counter or dining table. Cheers!

Sandra Louro and Ana Rita are both Portuguese, and both boast international experience. They joined forces to create a solution for anyone wanting to safely and elegantly transport their laptop on their bike. But they went even further, making this bicycle computer bag more versatile and ready to be slung over your shoulder. They drew their inspiration from the ‘tarra’, a traditional lunchbox, made of cork. They pedalled over much terrain with António Luz until they achieved the shape of the box. They exchanged many ideas with Zuñiga about how to fasten it and make it transportable. They did a lot of research, travelling back and forth to the craftsmen until it fit like a glove. ´Tarra’ combines the waterproof and shock-absorbing properties of cork with the smoothness and elegance of leather. Makes you want to pedal off into the sunset with it.

Now that the designer and craftspeople of the creative residence have brought new TASA products to the world, it’s time to study costing, production times, market, and adapt each of the pieces to the most appropriate solutions, to ensure they are well received.

But nothing will take away the pride we feel in seeing the essence of the TASA Project in each of the four products and in these young designers, who can now spread the word around the globe. Our thanks go out to them, to the craftspeople, to Loulé Municipal Council, which welcomed us at Cecal, gave them somewhere to stay, food and transport, to our partner, the CCDR Algarve, to the Casa da Cultura de Loulé and to Cria, which supported the initiative. We should do it again!